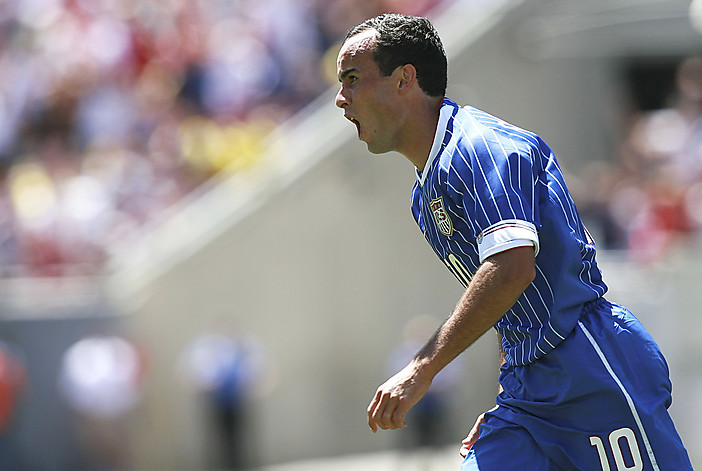 Finding the best position for a talented, versatile player isn’t the most difficult coaching dilemma, but it was one that three national team managers encountered with Landon Donovan.  Bruce Arena articulated the situation well when he said Donovan was the best player at so many positions, he never knew where to put him.  After the 2006 World Cup debacle – where Donovan played primarily as a withdrawn forward off of Brian McBride – Bob Bradley inherited the position conundrum.

The US won the first two games under Bradley, but were still erasing the memories of 2006 when they encountered Ecuador.  Sporting new jerseys, the US also unveiled a new formation: an incredibly aggressive 4-4-2 diamond. Brian Ching and Eddie Johnson started up top, Donovan played at the tip of the diamond, Clint Dempsey and DaMarcus Beasley started outside, and Benny Feilhaber made his debut at holding midfield.

Donovan pounced on a poor clearance in the first minute for a well-taken goal, but the US found itself overrun in midfield (if you’re wondering why, just read that lineup again.)  A halftime sub of 19-year-old Michael Bradley for Eddie Johnson changed the complexion of the game.  Bradley provided defensive cover in midfield, and Donovan slid up top with Ching to rekindle the familiar San Jose Earthquakes partnership.

The US generated a few more chances, and took the lead midway through the second half.  In the 66th minute, Oguchi Onyewu hits a long clearance to Ching.  Ching, demonstrating one of his greatest strengths, controls the ball at midfield with his back to goal, and creates separation from his defender.  Ching picks up his head, and plays a good ball forward to a sprinting Donovan.  By the time he receives the ball, Donovan already sprinted 40 yards, and though he started his run five yards behind a defender, he finishes it three yards ahead.  Suddenly, Donovan is running in space with only the keeper to beat, and three touches later, he slots the ball to the far left corner.

Donovan added a third goal a minute later to complete the hattrick, but this second goal was the quintessential Landon Donovan goal.  It demonstrated what made him one of the best US players: utilizing pace and awareness to run in behind the defense and create quality chances.  His best position on the field was wherever he could attack that way.