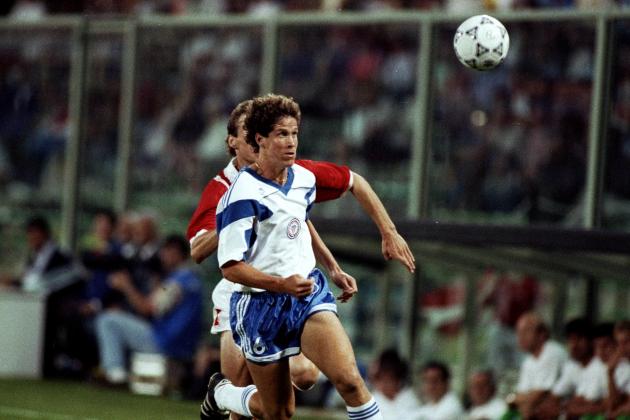 Bruce Murray emerged from the wilderness of mid-80s US soccer to retire as the leading goal scorer in national team history.  Though it was a consolation goal, it’s fitting that his list of accomplishments includes scoring in the World Cup.

There’s a good chance this is the least-viewed US World Cup goal in modern times.  The abridged version of 80s US soccer history is: NASL folds; FIFA selects the US to host the World Cup; Paul Caligiuri scores to qualify.  This is the landscape in which Murray started his career, playing for teams as varied as FC Luzern in Switzerland to the Washington Stars of the American Soccer League.  Along with many of his 1990 World Cup teammates, he also represented the US futsal team in 1989 that took 3rd place in the inaugural Futsal World Cup.

A futsal connection sent the US home from Italy with some pride.  Desmond Armstrong steps forward from central defense to deflect a pass.  He continues to pressure the loose ball, wins the result just inside his own half, and finds Peter Vermes wide on the right flank.  After a touch, Vermes sees a surging Tab Ramos, and leads Ramos just outside the box.  While Ramos skillfully cuts back inside to avoid a defender, Murray backpedals slightly to create separation from the defender.  Ramos lays off the pass, and Murray hits a first time shot from 10 yards away.  The placement isn’t great, but the quick shot catches the keeper by surprise and sneaks through his legs for the goal.

The US couldn’t find another goal past a 10-man Austria, and would lose 2-1.  However, the US created chances and exited the tournament with the belief that they could compete at this level.  Unfortunately for Murray, injuries ended his national team career in 1993, just before soccer’s popularity increased tremendously in the US.  Murray is still the 7th highest scorer in US soccer history.