US Attacking Options Against Mexico

It’s US v Mexico, Round 8 for Jurgen Klinsmann.  Klinsmann started his US coaching tenure with an appropriately disjointed 1-1 draw against Mexico.  Only Michael Bradley, Jermaine Jones, Tim Howard, and Michael Orozco remain from the starting XI that day.  However, the approach to attacking chances represented US v Mexico games in the Klinsmann era.  Mexico favor a high-volume approach to shooting, while the US tend to take fewer shots, but place a higher percentage of those shots on target. 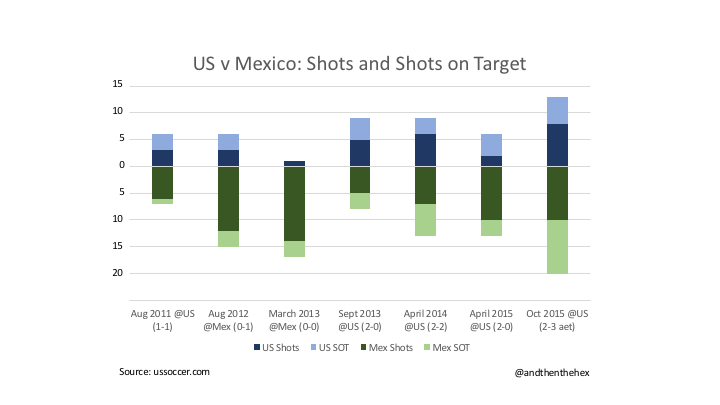 Mexico ran rampant with a front three of Javier Hernandez, Raul Jimenez, and Oribe Peralta.  They continually found space with late runs, overran Bradley, Jones, and Kyle Beckerman in midfield, and generated ample goal-scoring opportunities.  The US’ supposed numeric superiority in the 4-4-1-1 never materialized, and they held just 37% of possession.

It feels like an eternity has passed since that game.  Both teams showed promise at the 2016 Copa America and advanced to the semi-finals, but stunning losses to Chile and Argentina showed how much further there is to go.  Juan Carlos Osorio faced increased scrutiny for his player selection, but Mexico’s roster for this match raised few questions.  On the US side, for the first time since 2001, the roster against Mexico in World Cup Qualifying will not include Landon Donovan or Clint Dempsey.  I looked at the different tactical set-ups Klinsmann’s utilized without these two in the past, and the conclusion is that after a back 4, anything is in play.

Two attacking players have made this transition easier, and the first is Bobby Wood.  He had an excellent Copa America, bringing necessary pace to the US and an ability to run channels or get behind the defense.  Wood also has an attacking decisiveness on the ball, and he demonstrated this in his build-up work on Dempsey’s goal against Ecuador.  His initial movement toward goal draws the attention of the center-back and left back.  This eventually creates the space he uses to recycle the ball to Jones, who has the time and space to hit a perfect one-time ball to Dempsey.

Wood also complements Jozy Altidore extremely well.  Though Altidore has improved his aerial game and back-to-goal ability, he’s not a traditional target man.  Altidore is best utilized as a reference point high up the field who can immediately link with a teammate, be it Wood with the US or Sebastian Giovinco with Toronto.  Altidore and Wood started the last two qualifiers, and they should be up top against Mexico.  Even if Wood is not scoring goals, his movement helps the US find space vertically and horizontally.

The other player who’s helped the US transition is Christian Pulisic.  There’s little more to add to the story of Pulisic’s background, initial discovery, path to Borussia Dortmund, and emergence with the US.  Beyond his obvious individual skill, Pulisic has great tactical insight (my sincerest thanks to the Jurgen Klopp / Thomas Tuchel influence.)  Watch Pulisic (against Ecuador this past May) offer help in possession to Bradley and Darlington Nagbe, read the situation, and then accelerate into space to lead the attack.

This skillset enables Klinsmann to either slot him wide in a 4-4-2 or in the front line in a 4-3-3 and not lose that connectivity between the attack and midfield.  Though Pulisic often plays on the right side with Borussia Dortmund, his interplay with Fabian Johnson suggests he should play on the left side of the field for the US.  Aron Johannsson and Alan Gordon (selected after Jordan Morris’ injury) provide alternate options up front.

Question marks arise in midfield, but first, the backline.   From the roster selection, it appears that Johnson will play left back.  DeAndre Yedlin should play right back, though he played higher up the field as recently as the New Zealand friendly.  John Brooks – making his first Mexico appearance – will start at center-back, joined by one of Matt Besler, Omar Gonzalez, or Steve Birnbaum.

The loss of Geoff Cameron through injury hurts the US’ flexibility.  Cameron formed an excellent partnership with Brooks in the Copa America, but could also play holding midfielder in a 2-man or 3-man central midfield.  Jones’ return from injury mitigates the loss of Cameron; Jones played 83 minutes against LA this past weekend, and should be available to start alongside Bradley.  The two open questions are:

11th player will signal Klinsmann’s approach with the game, and is directly related to the midfield configuration.  If Sacha Kljestan gets the nod, expect Bradley to drop deeper in a 3-man central midfield with Jones shuttling.  One of Alejandro Bedoya or Graham Zusi could also return to a 3-man midfield, like the ones featured against Guatemala in March or against Costa Rica in Copa America.  Bedoya or Zusi would also offer the flexibility of an in-game switch between a 4-4-2 or 4-3-3.  Finally, Klinsmann could go extremely aggressive and start Julian Green, replicating the US lineup against Cuba.

Given the caginess of the US attack in previous encounters with Mexico, I expect we will see more caution through the midfield, particularly if Altidore, Wood, and Pulisic all start.  The key will be managing Jones’ workload, and adapting accordingly.  The US is unlikely to out-shoot Mexico, so the quality of chances taken and conceded will make the difference.

2 thoughts on “US Attacking Options Against Mexico”